As General Convention enters its second to the last day a great many resolutions must still pass through one or both houses. Many of the issues that captured the most attention and energy to this point has focused on

– Same-sex blessings
– the Anglican Covenant
– an omnibus resolution concerned with restructuring The Episcopal Church
– the 2013-2015 budget
– opening all aspects of church life, including the ordination process, to transgendered people
– The Episcopal Church’s response to the Palestine/Israel conflict.

Here’s where we are on these issues:

Authorizing same-sex blessings –
Yesterday afternoon, the House of Deputies, after much discussion and parliamentary fussiness, concurred with the House of Bishops to pass A049, Authorize Liturgical Resources for Blessing Same-Gender Relationships. The resolution includes the provision for that honors “the theological diversity of this church in regard to matters of human sexuality, and that no bishop, priest, deacon or lay person should be coerced or penalized in any manner, nor suffer any canonical disabilities, as a result of his or her conscientious objection to or support for the 77th General Convention’s action with regard to the Blessing of Same-Sex Relationships.”

After considerable discussion in the House of Deputies yesterday morning, all present were stunned by the unanimous passage of C095, an omnibus resolution that proposes a plan for re-structuring The Episcopal Church. The resolution creates a special task force of up to 24 people who will gather ideas in the next two years from all levels of the church about possible reforms to its structures, governance and administration. Their work will culminate in a special gathering of people from every diocese to hear what recommendations the task force plans to make to the 78th General Convention. Its final report is due by November 2014.

Today the House of Bishops approved the resolution as well. 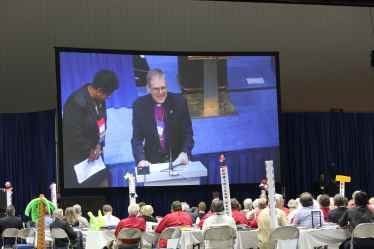 Yesterday afternoon bishops gathered in the House of Deputies to hear the budget presentation from the Joint Committee on Program, Budget, and Finance. Our own Bishop Steve Lane, the vice chair of the committee, offered the budget with the chair, Deputy Diane Pollard of the Diocese of New York. The three-year $111.5 million budget is predicated on 19% asking from dioceses and used as its organizing principle the Five Marks of Mission.

Today members of the House of Deputies met in small groups to discuss the implications, including the reduction of 12 positions (or 10.7 FTE) from the Episcopal Church Center, some of which are currently vacant, before they set a time as a committee of the whole to raise issues of concern. Members of Program, Budget, and Finance then addressed questions raised. They will vote on the budget later today.

Transgendered people fully included in the life of the Church
On July 9, by approving D002 and D019 the House of Deputies concurred with the House of Bishops that all aspects of life and ministry in The Episcopal Church should be open to people regardless of their gender identity or gender expression, including access to ordination.

Episcopal Church response to the Palestine/Israel Conflict
Earlier this week the House of Deputies passed both B019, which calls for the Church to make positive investment to assist with sustaining the Palestinian Territories and engaging in study and conversation among Christians, Jews, and Muslims, and C069, which calls for an more robust exercise of corporate social responsibility with regard to The Episcopal Church’s investment companies in that contribute to the occupation of the Palestinian Territories. Yesterday the House of Bishops concurred overwhelmingly with B019 but chose to postpone consideration of C060 and a conversation about corporate engagement.

For more visit Bishop Steve’s blog for his daily video reflections, The Daily Lap for interviews and news, and Mainers in Indianapolis for photos and Deputy of the Day postings and reflections.

Filed under Anglican Communion, General Convention, News from The Episcopal Church, The Church in a Changing World

One response to “More news from General Convention”