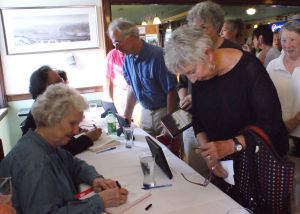 More than 450 people from as far away as Switzerland and Arizona found solace, grew spiritually, and pondered new ideas after attending the first annual Downeast Spiritual Life Conference in late August.  Feedback was exuberant. Overheard were remarks such as “This was one of the best organized conferences I’ve ever attended” and “great speakers!” A retired bishop wrote that he loved the conference and received much from it for his own spiritual journey. Clearly God was at work guiding this event.

communicated his or her own particular message about the importance of the spiritual life.  Andrew Harvey brought the Sufi mystical poet Rumi to life and showed how the poet’s message was still viable in the 21st century. Fr. Rohr reminded listeners that the second half of a life should not be spent remodeling the bathroom numerous times … that there are more important late-life issues at stake. And Phyllis Tickle explained her theory about the reforming of Christianity every 500 years, claiming that we have reached the age where the Holy Spirit, rather than the son or the father, is the driving force and focus of Christianity.

In addition to fine speakers, the weather, special events coordinator Leanne Batten, the Steering Committee, and scores of volunteers came together to make the event a huge success.  Volunteers steered attendees to safe and “ticketless” parking spaces, others passed out almost 200 box lunches, sold books and music CDs, worked at the registration desk, put up signs, passed out maps, and so much more.  The result was an event that was bigger than the sum of its parts.
Music helped frame the conference. As the retired bishop said, “people learn in different ways and how wonderful that this program was bookended by such fabulous music that reinforced the message of the conference.

The number of attendees was astounding. Even though we announced the event to the Town of Ellsworth’s business

community through the Chamber of Commerce newsletter and via solicitation of program ads, business owners and others in Ellsworth commented that they were “amazed” at the number of people on Main Street on Friday and Saturday. One business owner said that she had never seen so many “happy and patient” tourists come into her shop.

Sales of tickets to the conference and the workshops were swift. Less swift were ticket sales to the Paul Winter Concert, the main fundraiser for next year’s conference. However, ticket sales picked up with more than 350 tickets sold by concert time.

Financially, the event was also a success. The Spiritual Life & Learning Center at St. Francis that sponsored the conference will pay the church about $15,000 in conference profits to help offset its deficit.  The Saturday night concert raised $4,600 as seed money for next year’s conference. That money plus other funds, including a donation from the Bishop’s discretionary fund, brings seed money for next year to about $7,000. 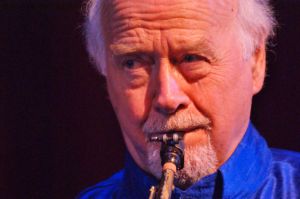 To ensure that the next conference will be as good if not better than this year’s event, the Steering Committee will email a survey to all who attended. Feedback will guide future conferences.

Next year’s conference will be at the Atlantic Oceanside Hotel and Conference Center in Bar Harbor. Plans for that event are already falling onto place; names of speakers and workshop presenters will be announced in January.

all photos by Marjorie Vaughan

One response to “First Downeast Spiritual Life Conference a Success!”