by the Rev. Chick Carroll
Deacon at St. Paul’s, Brunswick 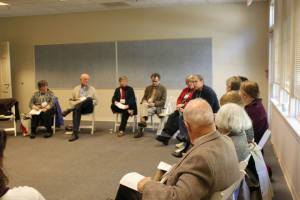 Poverty Roundtable at the 2013 Diocesan Convention

During all of 2013 many, perhaps most parishes in the Diocese of Maine have followed the practice, at the beginning of each meeting in the parish or the Diocese, of saying a prayer for those who are poor, sick, destitute, homeless and old( BCP page 826) and then asking a searching question. Perhaps some parishes will even continue the practice indefinitely.

The searching question asked was this:
” How will this meeting ( agenda, program) affect or involve those who are living in poverty?”

For those of us who have been asking this question, shouldn’t we now inquire of ourselves, individually and collectively, whether and how our consciousness of those living in poverty has changed. Have we gained in understanding?

From workshop conversations at this past Diocesan Convention, and from other conversations and readings my own understanding of our impact (those of us with plenty) upon those living in poverty has evolved considerably.

Perhaps foremost is the understanding in the Early Church of the relationship with those in poverty. To put it simply, many of the early church leaders, especially the Cappadocian fathers, made the shocking point that the poor give a gift to us, to those of us who are not in material poverty. The gift they make is that their need affords the rest of us the opportunity for love and for the making of our own gift to the poor. The poor, as Jesus, are powerless and in need. They are Jesus. They are the Body of Christ. ( See Matthew 25: 31- 46) And, we in our plenty, are given the opportunity to show the love which the Father showed to Jesus.

Summarizing the views of the Cappadocian fathers, author Susan Holman  said it clearly: “Both rich and poor take on the face of the Divine. The rich do this by imitating God’s mercy and justice… The poor do this by their basic needs… thereby imaging Christ. Service to the poor is treated as liturgy. In other words it is just as important for true worship as going to church.”

The idea that originated much later, the idea that basic human rights demand that we who have much must share with those who have little, is a notion that carries within it the danger of “them and us.” The danger is that we give out of obligation or “noblesse oblige.” The early church fathers saw the question not as one of human rights, but as one of our relation to God–God as giver of justice and mercy, and Jesus Christ as the face of the poor.

The early church fathers understood so much more clearly than we that Jesus was not simply a friend of the poor, not a stand-in for the poor. He is the poor, and he gives us the supreme gift of responding to him and to the poor as the Father responded to Jesus. We are in a liturgical relationship to those living in poverty. They give us the gift of giving to them- not in a relationship of inequality but in a dance of partners.

For me, this has been the most radical change in my own understanding. I owe much of it to reading and beginning to understand early church views, as translated by author Susan Holman.  And from it flow other understandings that have implications for the gifts and the programs we devise today.

One of these is for us to discern what it is those in poverty say they need, and not to impose our own ideas of what they need. We are in a relationship with those living in poverty, an intimate relationship, one in which deep understanding and discernment are needed. It is dangerously and deceptively easy to decide for others what they should need or want, and the results are always resentment, misunderstanding, and ingratitude.

There is another understanding that flows from the paradigm of the liturgy, the relationship of Jesus to the Father, and the relationship of those of us in plenty to those in poverty.  For us to be complete beings, beings in a sacred and liturgical dance, who give as God does, and who receive, as  Christ does, we must somehow be in direct relationship with those with whom we are dancing. And,that relationship must be one of equals, equally loved by God, even though the culture would tell us that we are not equals.

A merely transactional and impersonal relationship whereby we give and others receive is undoubtedly needed in our complex world, our world where there are designated agencies that take responsibility for collecting and distributing donations. But, for us, if we are to be in a relationship with Jesus, there is an equal necessity for us to overcome our fear of the “other”, to be in real and direct relationship with those in poverty, those who are the face of Jesus, the Body of Christ.