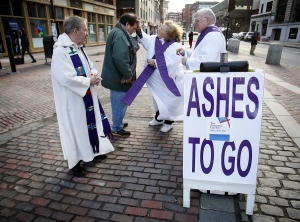 A group Episcopal clergy and laypeople will take the traditional Ash Wednesday practice of the imposition of ashes from inside of church buildings out to the people on the streets of Portland, Windham, Winthrop, Falmouth, Brunswick, and Waterville. In its third year in Maine, Ashes to Go has spread to three new communities in 2014.

On Wednesday, March 5, Ashes to Go will be available to all who wish the imposition of ashes and a brief blessing

In the Christian tradition, Ash Wednesday marks the beginning of Lent, the six weeks leading up to Easter. As a time of self-reflection for believers, Lent is often marked by prayer, penance, and charity.

In 2012 the Rev. Larry Weeks, rector of Trinity Episcopal Church on Forest Avenue who also serves as priest at St. Peter’s Episcopal Church on Washington Avenue, invited several clergy from area congregations to join him in sharing ashes at the two Portland locations. The clergy, fully-vested, planted a sign and then offered the ashes and a brief blessing to about 120 people between the two locations.

Weeks described one of the encounters, “A man in an expensive business suit walked by quickly, glanced at sign and us and kept going. Then he circled back slowly and approached and when he was in front of me, had tears in his eyes and said haltingly, ‘It’s been so… long.’”

The Rev. Tim Higgins, rector of St. Ann’s Episcopal Church in Windham,  described his experience in 2012 as “one of the coolest ministries I have even been involved with.” He added,  “A jogger came through and stopped long enough to pray with us, receive his ashes and continue on his jog, while saying, ‘I’ve never done that before, thanks so much!’”

Episcopalians in Chicago, St. Louis, New York, San Francisco, Seattle, Baltimore, Newark, Erie, Austin and many other cities and suburbs will take ashes to the streets tomorrow. The practice started with a priest offering Ashes-to-Go at a commuter rail station in the Episcopal Diocese of Chicago in 2007. It caught on and is working its way across the country.

Weeks added, “We found that many people had forgotten that it was Ash Wednesday and welcomed the opportunity to receive ashes and a blessing. It’s high time we venture outside our church walls to offer hope and forgiveness and healing to people who may still have a spiritual hunger but aren’t so sure about Church.”