Delegate of the Day – Sherri Dietrich for UTO

by Sherri Dietrich
UTO Coordinator for the Diocese of Maine

Sherri Dietrich, the new Province 1 representative of the United Thank Offering’s national board of directors

Today the General Convention worship celebrated the work of the United Thank Offering and I was one of the long line of blue-clad women (and a couple of men) who proudly processed in to the service and then across the stage to present the results of our dioceses’ UTO ingatherings from the past years. There were supporting hoots and hollers from deputies and bishops as the name of their diocese was called, but I didn’t hear any hooting from the Maine deputies. I think we should work on that for next time, and perhaps even invent a unique Maine diocesan holler—I’m thinking something like a loon’s cry or a moose call. Since the last Triennium in 2012 the United Thank Offering has gathered in and given out in grants some $4,400,000 dollars, and done the same with over $144 million in the 125 years since UTO was formed. That’s a lot of money and a lot of mission work, thanks to all of those coins dropped into Blue Boxes.

While the Deputies of the Day have been busy doing their work at General Convention I have been representing Maine at the Episcopal Church Women’s Triennium, taking place at the same time and in the same place—the gigantic Salt Palace, which I was sorry to discover is not at all made of salt. For the past few days ECW has been busy in meetings in which we changed our bylaws to conform to requirements of the IRS, announced the grant recipients for 2015, and celebrated UTO’s 125th anniversary at a dinner with Bishop Curry as our speaker. The next several days will include some more business and workshops about things from how to spread the word about UTO and get more people excited about participating in it to making and using Anglican prayer beads. 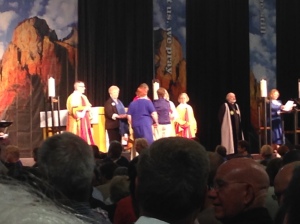 The ingathering at the UTO Eucharist. (Sherri in blue)

At the end of this meeting I will be joining the United Thank Offering Board as the representative for Province I, and I’m excited about the future of UTO and Maine’s part in it. In 2012 Maine’s ingathering total was $13,819.52, in 2013 our total was $10,239.22, and in 2014 the total was $8,607.80—a significant trend in the wrong direction! Be prepared to hear more about the practice of daily thankfulness and Blue Boxes soon.

Comments Off on Delegate of the Day – Sherri Dietrich for UTO

Filed under General Convention, Ministry and Outreach, News from The Episcopal Church