Filed under From the Bishop, General Convention, News from The Episcopal Church, Uncategorized 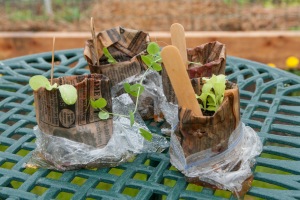 ay 31st, Scarborough Community Garden held a ribbon-cutting and open house. St. Nicholas Episcopal Church’s Vicar, the Rev. David S. Heald, offered a blessing and dedication. The new garden will address hunger in the community by growing nourishing vegetables for neighbors who struggle to put healthy food on the table.

Funded in part by a New Initiatives Grant from the Episcopal Diocese of Maine, organizers broke ground in the Fall of 2014, and began planting this Spring on Route 1 in Scarborough at a site provided by St. Nicholas.

Although galvanized by St. Nicholas’ members’ energy, the project was initiated through community-wide discussions and has a large network of partnering groups, volunteers, and supporters beyond the parish. Some of the partners and supporters of the collaborative community effort include: St. Maximilian-Kolbe Church, Scarborough Garden Club, Scarborough Food Pantry, 1st Congregational Church of Scarborough, Scarborough Rotary Club, Project GRACE, Cumberland County Master Gardeners, and Kitchen Gardeners International. Learn more about the garden and its supporters at http://scarboroughcommunitygarden.weebly.com/about.html

The Episcopal Church Foundation (ECF) has just released Planned Giving on Demand, a new resource to support congregations in their planned giving ministry. Whether you have a well-established legacy stewardship program or are just beginning to think about how legacy stewardship might benefit your congregation, Planned Giving on Demand offers both a robust toolbox and a supportive leadership structure to help you keep things moving forward.

The Planned Giving on Demand toolkit includes familiar bedrock pieces such as Funding Future Ministry and Planning for the End of Life, as well as a new user guide that breaks the process into user-friendly stages that lead to a successful and sustainable program. In addition, Planned Giving on Demand offers access to a private website that serves as a clearinghouse for up-to-date print and electronic resources.

If this sounds like something that would be useful in your congregation, consider yourself invited! I have purchased a number of Planned Giving on Demand toolkits on behalf of Maine congregations and would love to include as many congregations as possible in launching a network.

Ready to roll? If your congregation already has a legacy stewardship program in progress or has committed to engaging the process, you need only send me the name and contact information for your Planned Giving Shepherd and I will take it from there!

Not quite sure? On Monday, January 12, I will host a mainestewards webinar, “Planning for Planned Giving,” from 7:00-8:00 p.m. This discussion will include an introduction to Planned Giving on Demand. To participate, simply go to episcopalmaine.webex.com at the appointed time; look for “stewardship” on the list of meetings scheduled for that day; click “join” to enter the meeting site.

Want to talk it over? I am happy to talk by phone or via Skype with clergy and lay leaders who are potentially interested in Planned Giving on Demand. Please e-mail me at mainestewards@yahoo.com to set up a time.

Comments Off on Introducing Planned Giving on Demand

A group Episcopal clergy and laypeople will take the traditional Ash Wednesday practice of the imposition of ashes from inside of church buildings out to the people on the streets of Portland, Windham, Winthrop, Falmouth, Brunswick, and Waterville. In its third year in Maine, Ashes to Go has spread to three new communities in 2014.

On Wednesday, March 5, Ashes to Go will be available to all who wish the imposition of ashes and a brief blessing

In the Christian tradition, Ash Wednesday marks the beginning of Lent, the six weeks leading up to Easter. As a time of self-reflection for believers, Lent is often marked by prayer, penance, and charity.

In 2012 the Rev. Larry Weeks, rector of Trinity Episcopal Church on Forest Avenue who also serves as priest at St. Peter’s Episcopal Church on Washington Avenue, invited several clergy from area congregations to join him in sharing ashes at the two Portland locations. The clergy, fully-vested, planted a sign and then offered the ashes and a brief blessing to about 120 people between the two locations.

Weeks described one of the encounters, “A man in an expensive business suit walked by quickly, glanced at sign and us and kept going. Then he circled back slowly and approached and when he was in front of me, had tears in his eyes and said haltingly, ‘It’s been so… long.’”

The Rev. Tim Higgins, rector of St. Ann’s Episcopal Church in Windham,  described his experience in 2012 as “one of the coolest ministries I have even been involved with.” He added,  “A jogger came through and stopped long enough to pray with us, receive his ashes and continue on his jog, while saying, ‘I’ve never done that before, thanks so much!’”

Episcopalians in Chicago, St. Louis, New York, San Francisco, Seattle, Baltimore, Newark, Erie, Austin and many other cities and suburbs will take ashes to the streets tomorrow. The practice started with a priest offering Ashes-to-Go at a commuter rail station in the Episcopal Diocese of Chicago in 2007. It caught on and is working its way across the country.

Weeks added, “We found that many people had forgotten that it was Ash Wednesday and welcomed the opportunity to receive ashes and a blessing. It’s high time we venture outside our church walls to offer hope and forgiveness and healing to people who may still have a spiritual hunger but aren’t so sure about Church.”

Below are links to photos from the 2013 Diocesan Convention held at Point Lookout, Northport, on Friday and Saturday, October 25 and 26.

The Rev. Susan Kraus, the Rev. Lee Burns, and Delegate David Greer from St. Giles’, Jefferson, raise their cards for a vote.

The Rev. Audrey Delafield of St. Alban’s, Cape Elizabeth, and the Rev. Cindy Beaulieu of the Aroostook Cluster, greet one another at Point Lookout.

Thanks to Marjorie Manning Vaughan of St. Alban’s, Cape Elizabeth, for serving again as the Convention photographer, and to Stacy Parady for organizing and uploading hundreds and hundreds of pix!

View them as a slideshow or peruse them as a  set of photos.

The Episcopal Diocese of Maine has an opening for a full-time office assistant to start September 3.

Visit the Maine Nonprofit Job Board for details or click here for a full description of the position and information about how to apply.

The deadline for completed applications is Monday, August 12.

Ashes to Go at Monument Square (video from the Press Herald)

Praying Around the Diocese updated

Weekly updates on the new page on NNE, Praying Around the Diocese, was a bit neglected during General Convention and the catch-up period after. Visit each week to learn a bit about the congregations, chapels, and ministries we prayer for each Sunday in the Diocesan Cycle of Prayer.

As of today we’re all up-to-date with for this Sunday, Pentecost 9.  We invite you to follow this each week to get to know the Diocese of Maine.

Several Portland-area priests are takin’ it to the streets tomorrow.

Ashes-to-Go signs at Trinity, Portland, are ready for deployment.

The practice of taking the ashes to those who may not choose to or remember to attend an Ash Wednesday service in a church started in the Diocese of Missouri. (This morning’s USA Today has this story.)

The Rev. Larry Weeks, rector of Trinity Church and priest-in-charge at St. Peter’s, both in Portland, read about the practice in 2011 and said to himself, “We should do this in Portland next year!’”

Weeks continued, “It’s time we venture outside our church walls to offer hope and forgiveness and healing to people who may still have a spiritual hunger but aren’t so sure about Church.”

Others in the Portland-area clergy group have signed on to offer the imposition of ashes: the Rev. David Heald of St. Nick’s, Scarborough; the Rev. Regina Knox, diocesan urban missioner; the Rev. Shirley Bowen of Christ Church, Biddeford; the Rev. Nina Pooley of St. Bart’s, Yarmouth; and the Rev. Tim Higgins of St. Ann’s Windham.

Comments Off on Ashes-to-Go in Portland tomorrow

Filed under News from The Episcopal Church, Uncategorized